“The original version of Crosby Stills Nash + Young‘s Carry On is entirely okay. It makes its point. The revolution may have peaked but, man, we’re still on the edge of something beautiful, man, so just carry on, man, to peace love and understanding, man. Live however, captured on 1971’s 4 Way Street, you actually believe it. Love is coming for us all. War shall be forever banned. Richard Nixon will not be re-elected in a year’s time by the single biggest landslide in history, America will not keep mucking around in Vietnam for four more bloody years. It’s the jamming, of course. Neil Young and Steve Stills facing off (with rhythm section Fuzzy Samuels and Johnny Barbata in strong support) riding the wave to heaven’s gate itself, leaving the original song far behind for at least ten minutes. Meanwhile in a hotel in Las Vegas, Hunter Thompson is glimpsing through ancient eyes what he’d come to call the high water mark. These things are not unconnected.” (Philip Random) 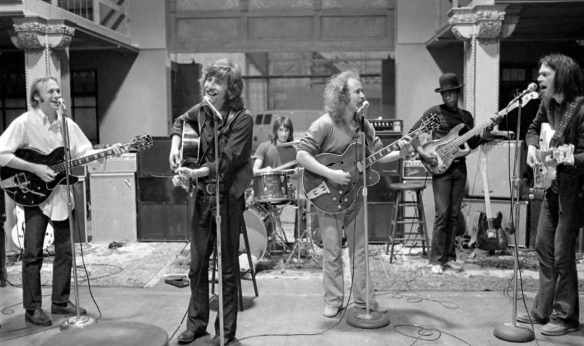