“Eric Burdon took his whiteman-slumming-in-the-blackman’s-world thing all the way to the edge (and beyond) on his second (and last) album with the band known as War, with the epic take on one of the great Rolling Stones songs a definite (and definitive) highlight. It was released in 1970, but I didn’t hear until 1994.  A moment I remember all too well.  Kurt Cobain had just offed himself, everybody was fumbling around in shock at my friend Steven’s place. Suddenly some guy whose name I forget said something like, ‘F*** you, Cobain. There’s always something to live for. I bet you never even heard this.’ And then he slapped side one of Black Man’s Burdon on the turntable.” (Philip Random)

“Propaganda are mostly forgotten now, but trust me, this is what 1985 sounded like.  Big, majestic, mysterious, not afraid to explore the darker side of things – a dream within a dream indeed. All credit to the band themselves, who I know nothing about except I think the woman doing the singing was German (maybe they all were). But don’t overlook the guy in the control room, twiddling the dials, pulling it all together – one Trevor Horn who was rather a big deal at the time working with the likes of Frankie Goes To Hollywood, ABC, Grace Jones, Malcolm McLaren’s Duck Rock, not to forget Yes and The Buggles (he was in both of them).  Pop sonic artist of the decade?  There are worse arguments.” (Philip Random)

“Speaking of the Brave Generation (ie: those of us who were still little kids as the 1960s flipped over into the 1970s), pretty much everybody had a half-cool older brother or sister or cousin that had a copy of the Guess Who‘s Share The Land lying around – the one with the wise Indian on the cover. Which was rather the hippie teenage dream at the time. Smoke a little maryjane and get some mystical magical guidance from somebody/anybody who wasn’t your dad or your grand dad or your hockey coach, or anyone even remotely connected with your suburban whitebread, soulless culture. Or as the lyrics go in Three More Days (Burton Cummings channeling his inner Jim Morrison) ‘Freedom – paint me a picture – show it to me right now’. And then the band got busy stretching things out and tearing them up. Epic indeed.” (Philip Random) 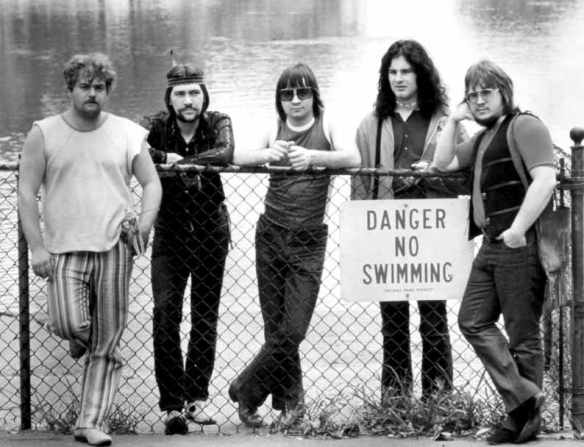 In which Jethro Tull remind us that July 20, 1969 may well have been the best day humanity’s ever known. Because even if there were brutal wars going on all over, children starving, good people going down – a man was walking on the f***ing moon (two of them actually), and if you were any older than three, you were watching it on TV. Including astronaut Michael Collins, who was the guy stuck back in the command module orbiting around while his two buddies got all the glory. Which is what the song’s really about. To be that close, yet so far away.

“Green on Red are yet another of those bands that never got the notice they deserved. Folk, rock, country, maybe a little psychedelic – they had a sound that was hard to get tired of, and, every now and then, a song like 1983’s Brave Generation (found on their first album) that just cut through all the cocaine banality of the time. At least, it did for me, probably because I’d never really thought much about my particular generation – the ones who were little kids when all the bigger kids (aka the hippies) were running wild, storming heaven, doing more than just talk about revolution. But that was all pretty much over by the time our puberty hit. The Beatles had broken up, Flower Power had wilted, Richard Nixon was getting re-elected, the Vietnam War still wasn’t over. I guess that made us brave more or less by default.” (Philip Random)

The Solid Time of Change is our overlong yet incomplete history of the so-called Prog Rock era – 661 selections from 1965 through 1979 with which we hope to do justice to a strange and ambitious time indeed, musically speaking.

Part Forty-One of the journey went as follows:

“In which T-Rex relax the groove a bit with an album cut that nevertheless sounds at least as big as its title. The album being Electric Warrior, and a gem it is from first note to final fade, cool and wild, and bubbling over with sensuous groove and delight.  It even tastes good, I swear.” (Philip Random)

The cool kids were confused. What the hell was Neil Diamond doing at The Last Waltz, The Band’s farewell concert (still considered by many to be one of the greatest concerts in rock and roll history)? What he was doing was delivering the goods (in leisure suit, shades, freshly coiffed hair), destroying all notions of cool and uncool with a song that told the fierce and sad truth about what time does to us all. It removes us completely, but maybe if we cut the bullsh** at least some of the time, our songs remain.

It’s 1969 with the Euro hippie underground in a state of serious flux and eruption in the wake of all the uprisings and insurrections of 1968. Nevertheless Can, four German weirdoes and their American singer, poet, frontman (who will soon go at least slightly mad) find a few moments to throw down a strange little ditty about the Upduff family and their troubled trip to Italy. WARNING: if your grandma dies while traveling in a region populated by well organized car theft rings, don’t wrap her up in a tarp and tie her to the top of the car.