“The first time I ever heard mention of Hawkwind, it was some punk rock loudmouth dismissing them as metal heads who’d fried their brains on too much brown acid. Which instantly sounded like something worth investigating. What they are, or certainly were (because it’s the deep weird 1970s, I’m thinking about here), was proper anarcho-hippie-revolutionaires who made the very best of their fabulously fried brains. Because it’s f***ing true, what the guy’s singing about in The Golden Void — the corridor of flame and the psychedelic warriors who commit to it, find themselves way the f*** out at the edge of time. Because I’ve seen them in my psychedelic journeys. Hell, I’ve been one, doing my infinitesimal bit to keep the universe expanding as it must, riding that big and glorious and infinite boom to its ever blooming edge. It’s all true. Trust me. I wouldn’t lie about something like that, and neither would Hawkwind. You can hear it in the passion of the performance, every means utilized to evoke what they’ve encountered: ever spiraling, never ending, indescribable, and the thing is, they’re still there, down the golden void, and so am I, surfing fractal edges of … eternity, I guess. Time and space are like that if you’re moving fast enough. I think. I wish I could somehow prove any of this. Which I suppose I can. But not if you won’t listen to stuff like The Golden Void at proper atom splitting volume … with the right kind of ears.” (Philip Random)

“If the house was on fire and I could only grab one David Bowie album, I’d die for sure because I’d be stuck there trying to make up my mind. Or maybe I’d just be f***ing honest with myself and grab Diamond Dogs, because I’d be lying if I said it wasn’t the one I’ve listened to the most over the years, the one that doesn’t even begin to have a weak or misguided moment, the one I’ve never seemed to grow even slightly allergic to, perhaps because it’s so witheringly uninterested in being pleasant. And Sweet-Thing-Candidate-Sweet-Thing (the mini-epic that takes up most of side one) is the high water mark.

The Ziggy alien is long gone by now. This new Bowie creature is very much earthbound – half human, half dog, and rolling in the muck and mire of an apocalyptic hellscape that’s equal parts Hieronymus Bosch, Salvador Dali, and George Orwell. And he’s running for political office,. He wants to be Big Brother. Which is sort of the concept here. Diamond Dogs being the album that was originally intended to be an adaptation of Orwell’s 1984, but Mr. Bowie couldn’t secure the rights, so it ended up being its own uniquely dark and harrowing thing. And yet there’s a sweetness at the heart of it, a sorrow even, a sliver of soul and humanity that suggests maybe all is not lost. Not yet anyway. Welcome to the early-middle part of the 1970s, the outlook may be grim, but damn, if the noise isn’t superlative.” (Philip Random)

“It’s easy to file T-Rex away as a glammed up (and out) pop monster whose singles absolutely nailed the zeitgeist for a year or three in the early 1970s, and they certainly did all that (in Britain anyway). But main man Marc Bolan could also just lay down a brilliant song – poetic, psychedelic, vaguely surreal, rather like the times, but also timeless, with Ballroom Of Mars (found on 1972’s Slider) exhibit A in this regard. Because that’s how I found it, at least a decade after the fact, wasting a day, drinking red wine so cheap the only way to make it palatable was to pour it over ice, maybe add a touch of something sweet. But the sun was shining and the company was good and … holy shit, who is this? It’s T-Rex, of course, gripped in the arms of the changeless madman. It means something.” (Philip Random)

“It was the night John Lennon was murdered. My friend Simon dropped by with some LSD and, given the extremes of the moment, our fates were sealed. It was our profound duty to now trip the vast lysergic, play a pile of Beatles records and see where the mystical magical vibrations might take us. They took us to dawn, sitting in my car now, high up a hilltop, taking in the first grey light of a cold and misty day. We had Simon’s little brother asleep in the backseat with a dog named Alice (it’s a long story) … but the Beatles weren’t on the playlist anymore. We’d sort of lost track of them as things started to peak, the gods having other plans for us apparently. Now it was a mixtape Simon had made of more recent stuff, moody and cool and mostly instrumental. Except here was Peter Gabriel suddenly, singing Here Comes The Flood, but not the version from his debut album, this was sparer, sharper, far better. I later discovered it was from Robert Fripp’s Exposure album — everything peeled back to just voice, piano and some ghostly Frippertronics. A song of apocalypse, no question, of saying goodbye to flesh and blood. Yet not forecasting doom in the end, but rather a sort of dreamlike survival. And then the rain really started to deluge on that hilltop. And it still hasn’t stopped, not really, the 1970s being known as the last decade that the sun ever really shone.” (Philip Random)

“With a small handful of exceptions, the very best Bob Marley is the very early Bob Marley, the stuff he recorded long before we, the godless multitudes of greater Babylon, had a clue that he even existed, when he was still just some struggling Jamaican local trying to believe in his soul. In particular, you’ve gotta love what he did with the singularly unsane Lee Scratch Perry in the producer’s chair. I do anyway, the two of them (and the band, of course) exploring far darker, edgier realms of soul and rebellion than what would eventually come to hog all the space on the Greatest Hits albums, get hippies dancing around bonfires, pretending they’re little birds.” (Philip Random)

“By the time I was thirteen or fourteen and paying proper attention, there were three versions of I Know I’m Losing You percolating around the radio airwaves: The Temptations’ original, Rod Stewart’s stomping rocker, and Rare Earth‘s stretched out epic. Actually, make that four, because Rare Earth also had a live version which was the best of bunch – rock hard, funky, a powerhouse that just went on, on, on, because sometimes, what’s going down is just too good to stop, so you don’t. A lot of great early 1970s music had this, particularly on live albums. Like the message hadn’t been received yet that the revolution was over and the good guys lost, so just keep pushing, pushing, pushing, this superlative noise must never stop. And as long as I manage to hang onto albums like Rare Earth In Concert, I guess it won’t.” (Philip Random)

Second of two in a row from the soundtrack to the movie called Performance, which if you haven’t seen it yet, why not? Memo From Turner being the single Mick Jagger track that puts the lie to the entirety of the rest of his so-called solo career (ie: it’s really quite good), managing to sound every bit as down and dirty and relevant as what his regular crowd were up to at the time (ie: riding their sustained peak).

“It’s hard to get a specific date on Bucky Skank, just sometime in the 1970s, probably post 1972, which I don’t even know for sure, it just feels right that it came from the Black Ark, Mr. Lee Scratch Perry and his Upsetters being known for their stoned and wistful wandering both in and out of time. The groove is odd, almost broken. The lyrics are mostly nonsensical to my non-Jamaican ears. But it always brings a smile.” (Philip Random) 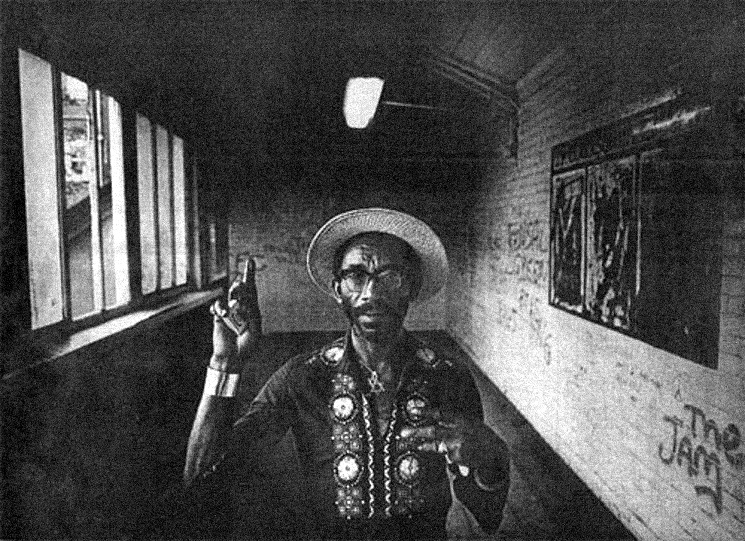 “Neil Young’s Rust Never Sleeps was the final album of his best decade (1970s), the one where he acknowledged punk rock while reminding us that he and Crazy Horse had been making a proper garage racket long before the likes of the Clash, the Sex Pistols, the Ramones hit the scene. Not that Rust Never Sleeps is a punk rock album, just raw and loud, and that’s all reserved for Side Two which kicks off with the one of a kind epic Powderfinger. Epic, sorrowful, poetic — I always assumed it was about the American Civil War, a young kid left behind to defend the farm (or whatever), facing down an approaching enemy with no hope at all yet determined to pull the trigger anyway. But that’s just my read. Different from Neil’s, I’m sure. And everybody else’s for that matter.” (Philip Random)