“Three in a row from Sonic Youth’s Daydream Nation, the suite known as Trilogy. Because it’s that kind of album. Crucial for both the culture as a whole (I think), and me in particular (I know). Because there it was, late 1988, the Winter of Hate, things having fallen apart (it’s a long story). I’m flat on my back on the bedroom floor, my parents place (another long story), so-called grown man doing yet another season in hell, recovering from various injuries and afflictions (self-inflicted and otherwise), too spent for anything but this prolonged commitment to nothingness … which could only be filled it seems by the sprawl of one monster of an album. Which was perfect really. If you’re only going to have just one album at the end of 1988, hard rains a-falling (metaphorically and otherwise), it may as well be the four sides of music and noise inseparable known as Daydream Nation, reminding you that the biggest truths have no boundaries, the most important stories never quite add up, the best songs never quite hold together, always yearning for, grasping for, gunning for MORE … and thus they are defined as much by the chaos at their edges as the calm at their centres (or is the other way around?).

The Trilogy from Side Four gets nod here, because it’s the final climax of an album that’s full of them. Guy wanders the sprawl, gets high, likely something psychedelic because he’s truly seeing the wonder in things (The Wonder), but then comes the long slow descent, the long walk home. He runs into some jocks, gets his shit kicked, ends up fading into nothingness (Hyperstation). And then who knows what happens? Except shit erupts. Like a god damned top alcohol dragster tearing up the quarter mile, fumes so intense they cause a rare local breed of starling to go extinct. (Eliminator Jr)  Life is a nuclear eruption. A chain reaction daydream that never ends. That’s my impression anyway. What’s yours?” (Philip Random)

The lead-off track from maybe the greatest album ever in the history of anything, Teenage Riot is where Sonic Youth get political, make their demands explicit as to what it’s going to take to get them the f*** out of bed and deliver the goods. A full-on teenage riot and nothing less. Which may be inappropriate, wrong even, but f*** is it fun to tear up Main Street, smash all the windows, not get caught! Which by the end of Teenage Riot is exactly what’s going on – Misters Moore and Renaldo annihilating frequencies with their magic guitars, smashing every window and door, setting all humanity free for a while. Even the adults. The rhythm section’s not half bad either.

The Final Countdown* is Randophonic’s longest and, if we’re doing it right, most relevant countdown yet – the end of result of a rather convoluted process that’s still evolving such is the existential nature of the project question: the 1297 Greatest Records of All Time right now right here. Whatever that means. What it means is dozens of radio programs if all goes to plan, and when has that ever happened?

Tracks available on this Youtube playlist (not exactly accurate).

“Silver Rocket may well be the perfect Sonic Youth nugget. On one level, it’s a ripping cool pop song about riding a silver rocket, I guess, or perhaps heroin. On another, it’s a metaphysical hand grenade that blows a gaping hole through the reality barrier into the next nineteen dimensions. And it accomplishes all of this in barely three minutes.” (Philip Random)

The Final Countdown* is Randophonic’s longest and, if we’re doing it right, most relevant countdown yet – the end of result of a rather convoluted process that’s still evolving such is the existential nature of the project question: the 1297 Greatest Records of All Time right now right here. Whatever that means. What it means is over a year of radio if all goes to plan, and when has that ever happened?

“The song part of Total Trash is cool enough, but part two is what makes it essential – the noise part, what happens when the various rules of music break down and pure escape velocity takes over. I remember seeing Sonic Youth perform this live in maybe 1991 and having one of those profound and prolonged WOW moments that I can’t help calling religious. I remember thinking, they aren’t really playing this music, they’re just channeling it, deflecting it, aiming it, wrestling with it. It’s like they’ve punched a hole in a cosmic dike and suddenly it’s all just about containment. But not even that. Because this kind of flood can’t be contained. All you can really do is ride it, keep moving, keep playing, because if you don’t, you’ll get dragged under, and where’s the glory in that?” (Philip Random)

The ninth of a planned forty-nine movies, each forty-nine minutes long, featuring no particular artist, theme or agenda beyond boldly going … who knows? Or as Werner Von Braun once put it, “Research is what I’m doing when I don’t know what I’m doing.” And we definitely have no idea where all this will take us.

Further installments of the Research Series will air most Sundays at approximately 1am (Pacific time) c/o CiTR.FM.101.9, with streaming and download options usually available within twenty-four hours via our Facebook page.

“In which Sonic Youth muck around with drum machines and whatever, take the piss out of a Madonna song, turn it into a zeitgeist-defining masterpiece. At least, that’s what my friend Martin thought. And he was a loud guy, persuasive. Indeed, there was a brief chunk of 1989 when Into The Groovy really was the greatest record ever, in the history of all humankind. Why argue?” (Philip Random) 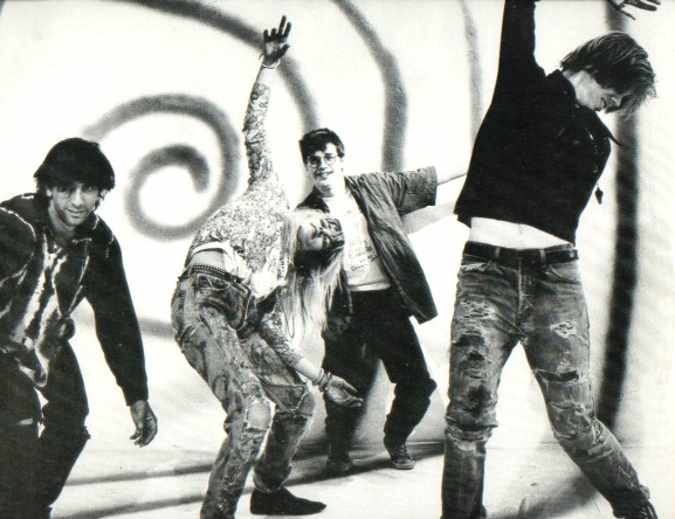 “Evol (the name of the album in question) is love spelled backward, which is pretty much what was going on in 1991, Vancouver’s Pacific Coliseum, as Sonic Youth warmed up Neil Young + Crazy Horse, choosing not to pander even slightly to all the aging hippies in the house, but rather to deliver unto them a profound and beautiful and sustained NOISE. The climax came with Expressway to Yr Skull, which actually starts out kind of nice, but then ‘We’re Gonna Kill – The California Girls – We’re gonna fire the exploding load in the milkmaid maidenhead.’  The hippies were very confused, angry even, but I just laughed. The times, they just kept a-changing.” (Philip Random)